Broken Promises: A History of Conscription in Canada 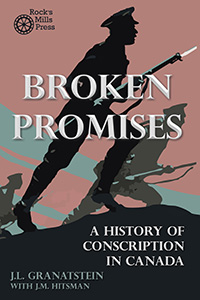 When Britain declared war on Germany in 1914, Canada sent a volunteer force. As the war progressed, however, reinforcements were needed. Quebec resisted, for demographic reasons, but there were larger questions as well: 'To speak of defending French civilization in Europe while harrying it in America seems to us an absurd inconsistency,' wrote Henri Bourassa in August 1916. Bitterness and division were the product of poor government handling. Granatstein also explores how conscription did not go away following World War 1, but became an issue again in World War 2, the Korean War, and the Cold War.