Ben and the Colonel 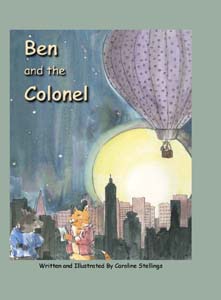 Ben is tired of working in a widget factory and has decided to leave the dreary city behind. But then Colonel Dewey and his broken-down hot-air balloon drop out of the sky and into Ben’s life. This big orange cat, with his southern drawl and unique personality, travels the world making friends and giving free balloon rides, so his riders can experience the joy of living. After accepting Colonel Dewey’s offer of a job, Ben meets some of his frequent fliers — an elderly Welsh corgi named Mrs. Tudor, two fashion designing rats named Virgil and Newton, and Juan Carlos and his big family of toads from Mexico. When misfortune befalls the Colonel, Ben enlists their help to repay the lovable cat’s kindness and discovers why friendship is more important than all the money in the world.