Secret of the Sevens 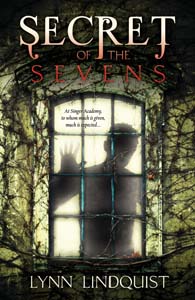 Everyone at Singer, a boarding school for underprivileged kids, knows the urban legend of the Society of Seven. Nearly two decades ago, the original members of this exclusive guild murdered the school's founder and then perished in the fire they'd lit to hide the evidence. Or so the story goes. Talan Michaels doesn't care about Singer's past, however. He's too focused on his future and the fact that he'll be homeless after he graduates in May. To take his mind off things, he accepts a mysterious invitation to join a group calling itself ôthe Sevens.ö He expects pranks, parties, and perks. Instead, he finds himself neck-deep in a conspiracy involving secret passages and cryptic riddles about the school's history. Even worse, he's now tangled in a web of lies, and in a plot that someone will kill to keep hidden.